Owned by the city of Saint Paul, and operated by Minnesota Sports & Entertainment, the Xcel Energy Center, named after its corporate sponsor, was built on the site of the St. Paul Civic Center following its demolition. After the National Hockey League’s Minnesota North Stars moved to Dallas, demand for a replacement grew. In April 1998, the project gained state-approved funding.

In 2004, the Xcel Energy Center was named by ESPN as the best overall sports venue in the U.S.

The arena features an integrated scoring, video, information and advertising display system, including a large LED circular scoreboard with multiple displays, close to 1,100 feet (340 m) of ribbon display technology mounted on the fascia, and huge video displays on the outside of the facility. In 2015, every seat in the venue was replaced with cushioned seating for maximum comfort. The arena also features a “crow’s nest,” in each of the stadium’s corners, a different function assigned to each. 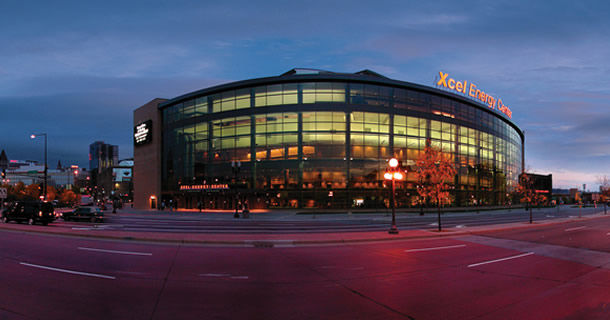